Santa Cruz is a Chileancity and commune, located in the Colchagua valley, in the O'Higgins Region, located on the southern shore of the Tinguiririca river, 110 miles from Santiago, Chile's capital city and 27 miles from San Fernando.[5]

There is no exact data about the founding of the city, although there is an official date when the city became a municipality in the year 1891,[6] the same year that Pichilemu did.

From its beginnings, the town was a center of handcrafted artifacts and agricultural development, with wheat, tomatoes, and wine being the main products of the area. Because of the relation with countryside traditions from its beginning, Santa Cruz offers an authentic look at the rural traditions of Chilean culture expressed in the wine, the food, and the traditional sports such as the rodeo.

The city of Santa Cruz was among those affected by the 2010 Chile earthquake.[7] 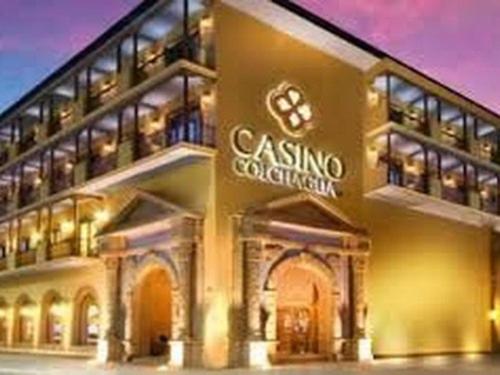 Santa Cruz has very well preserved colonial architecture. The most famous tourist attractions of the city are located in the Plaza de Armas. These include the historic Santa Cruz church, Santa Cruz Hotel, and Carillon Clock, the latter of which was constructed by order of mayor Carlos Cardoen Decoene in 1970, and which is used today as an interactive tourist information center. Other noteworthy attractions include the Museum of Colchagua, the Casino of Colchagua, and the Wine Train vineyard tour.

In the last two decades, rural tourism has become an important source of revenue for the city, the development of this industry was due specially because of the vineyards placed in the valley joint in a project called 'Wine Route',[8] that offers several tours in the area[5]

/give-my-regards-to-blackjack-raw/. Temperate warm climate, with rains between June and November.[5]

As a commune, Santa Cruz is a third-level administrative division of Chile administered by a municipal council, headed by an alcalde who is directly elected every four years. The 2012-2016 alcalde is William Arévalo.[1]

Within the electoral divisions of Chile, Santa Cruz is represented in the Chamber of Deputies by Mr. Ramón Barros (UDI) and Mr. Juan Carlos Latorre (PDC) as part of the 35th electoral district, (together with Placilla, Nancagua, Chépica, Lolol, Pumanque, Palmilla, Peralillo, Navidad, Litueche, La Estrella, Pichilemu, Marchihue and Paredones). The commune is represented in the Senate by Andrés Chadwick Piñera (UDI) and Juan Pablo Letelier Morel (PS) as part of the 9th senatorial constituency (O'Higgins Region).